Konark: 20th November 2017, on the eve of World Children’s Day the Konark based Community Radio ‘Radio Namaskar’ was taken over and managed by children. Today’s entire programme of the community radio was anchored, managed and broadcasted by the children only. First time in India more than 100 Children participated & managed a Community Radio with whole day live broadcast.

It is pertinent to mention here that Community Radio  ‘Radio Namaskar’ since its inception from 10th February 2010 has been continuously broadcasting programmes related to building awareness of the communities and reaching out to communities with information concerned with the benefits of the larger section. The Community Radio has been felicitated and appreciated time and again by Central Government and different National, International Agencies for its innovative and ground based programme with communities through broadcasting.

Radio Namaskar with ActionAid & Unicef is having the engagement of supporting children to take over the community radio programme. On the eve of World Children’s Day, more than 100 children from different districts like Puri, Mayurbhanj and Dhenkanal came together at Konark and collectively took over the community radio and managed the entire programmes of the day. The structure, design, contents and broadcasting of the entire programme of the day was planned, managed and owned by the children collectively. More than 100 Childrens voice was broadcast which is unique & record in India. 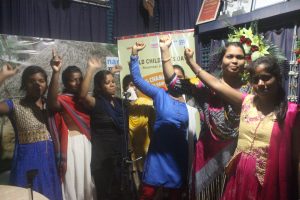 N A Shah Ansari, Chairperson of Namaskar Community Media Network & nationally acclaimed expert in Community Radio said, “This innovative efforts would help the children in having independent expression of their thoughts, views and ideas. And that would help the children to evolve as conscious citizen in the days to come. Also, the collective efforts would encourage other children to get connected”.

Debabrat Patra, Regional Manager, ActionAid, Bhubaneswar said “Children themselves are now champions against child marriage. Opportunities like this through community and FM radio gives them a voice that reaches many more people to stand against the practice.

B N Durga, Programme Officer, ActionAid, Bhubaneswar said that “ The way children contributed to the community radio programmes through sharing their issues of their concern, experiences and aspirations  through taking over the Community Radio Namaskar indicates that children can equally contribute like any other citizen. Therefore, it is vital to build the agency of the children, build their perspective on rights and create platform to share their thoughts.

Yumi Bae, Chief of Field Office, UNICEF Odisha said, “Concerns expressed by the children are real. They must be heard and respected as they guide us in making this world a better place for every child. We are extremely grateful to all the radio stations that partnered with us here in Odisha, giving the children the space to talk, interact and learn.”

On this World Children’s Day adolescent and young girls and boys who took a stand against child marriage in their own communities also spoke of the need for education, better health, ending violence and gender discrimination and an end to the practise of child marriage on different community radios of Odisha.