When Union coal and power minister Piyush Goyal set a target of providing affordable round-the-clock electricity to all by 2019, it seemed overambitious to some. However, one public sector enterprise went into an overdrive to turn this dream into a reality.

During 2015-16, domestic coal availability at thermal power plants was record 28 days, with no plant facing fuel scarcity. This, in turn, kept a check on India’s forex outflows as demand for imported coal remained under control. India’s power sector heavily depends on coal as over 80 per cent of the country’s electricity is generated by thermal plants.

But how did Coal India, which faced one of its gravest production crisis during 2010-11 with nearly no production growth, manage a turnaround to live up to its reputation of being the world’s largest coal miner? The answer lies in a combination of policy-related reforms, state-Centre partnership, swift execution and close monitoring by the ministry.

“There was a paradigm shift in the resolution of the issues while taking the states along” said Anil Swarup, secretary, ministry of coal. The coal ministry used a three-pronged approach – increasing land availability, fast environmental clearance and efficient evacuation, he added.

Former chairman of Coal India, Partha Bhattacharyya, explains how the usage of the then prevalent Comprehensive Environmental Pollution Index (CEPI) by the Union environment ministry led to Coal India projects being “freezed” while the miner struggled on production front. 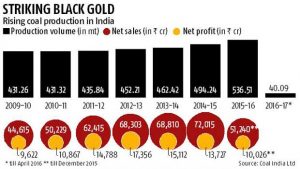 The CEPI was formulated by IIT-Delhi which measured pollution resulting from industrial activities. Any score above 70 was considered “critically polluted” and the clearance for any greenfield project was not given. In case of a brownfield project, environmental clearance was withheld.

The CEPI formula took particle dust matter, sound pollution and release of toxic matter into water as the parameters with more weightage given to the latter. Almost all Coal India projects used to score above 70.

“We took up the matter and explained to the ministry that mining doesn’t involve toxic matter being released into the water. If this was looked into, our score came down to 40-45, which is within the permissible limit,” Bhattacharya explained. The plea did not receive positive response and major brownfield projects got stuck. However, with the BJP-led National Democratic Alliance (NDA) government coming to power, things took a turn for the better after the sub-cluster analysis method was implemented.”Environmental clearances and forest clearances have been fast-tracked now. This has resulted in increased production as we are able to open new mines when old ones wear out,” a senior Coal India official said.

Coal India grew by 8.6 per cent in the last financial year, compared with 6.9 per cent growth in 2014-15. It has 431 operational mines with plans for further expansion. The average life of a mine is 30 years.”We established an institutional approach to work with the ministries to get necessary clearances,” Swarup said adding, “There was not a single case where any regulation was bypassed. We just fast-tracked the process.”

During the beginning of the 11th Plan Period, Coal India meeting the requirement from the energy sector with 5-5.5 per cent growth.On the operational front, the share of work and responsibility between the government and the public sector enterprise was clearly defined.

“The task of the Ministry was more of a facilitator instead of a monitor, when it came to coal production. There was a clear division of work between the Ministry and Coal India with the Ministry taking the lead in resolving issues with the Ministry of Environment and Forest as well as the Railways,” the coal secretary said.

Land acquisition for expansion and growth was also smoothened and prioritised. At a time when the private sector companies complained about land availability to execute projects, Coal India had a smooth journey. “No meeting was held in New Delhi, we went to respective states and convinced those to expedite clearances by proposing the value that coal mining would bring to their state,” a senior coal ministry official said. The miner got clearance for close to 3,000 hectares land last year, double than the previous year. It is now in possession of more than 5,000 hectare of land. The company has upped its land acquisition budget by a near 2.5 times to Rs 60,000 crore over a period of four years.

Its improved coordination with railways also boosted the scenario as rake allotment during 2015 rose to 121 from 91 in 2014. The coal ministry also formed joint ventures with the railways to build dedicated corridor for efficient movement of coal.”Increase in rake availability in the last two years helped in smooth evacuation of coal and its evacuation capability will increase further as the three crucial rail links become operational,” said Debasish Mishra, partner at Deloitte Touche Tohmatsu India.