The national capital has the most number of bogus school education boards and universities in India, dishing out fake degrees and certificates to hundreds of unsuspecting students each year.

This is worrying considering the admission season is around the corner and thousands of students, especially those who fail to make the cut in popular Delhi colleges, will be looking for options.

The National Institute of Open Schooling, an approved education board under the Union human resource development (HRD) ministry, lists 47 fake boards on its website, of which 21 are in Delhi.

Of the 74 fake boards listed in the 2016 prospectus of the Indira Gandhi National Open University, 44 are in Delhi. Also, the Capital has the second-highest number of fake universities in the country, five out of 22 , according to the University Grants Commission (UGC).

What’s even more disturbing is that the HRD ministry doesn’t maintain any data on fake boards. It said as much in reply to an RTI application by Hindustan Times.

“There is no central law or authority to define fake or unrecognised boards, but those boards that haven’t been recognised by state governments or the ministry of human resource development come under the category of fake board,” said advocate Ashok Aggarwal, who takes up education-related cases in the Delhi high court.

“So students passing from these boards don’t get admission in colleges and face an uncertain future.” 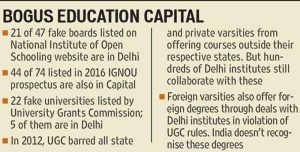 The Council of Boards of School Education in India is a registered society of education boards in the country but it lacks legal muscle to declare any board as fake.

Another threat to the future of Delhi students is the legal grey area exploited by institutes to collaborate with recognised institutions and foreign universities.

A case in point is students who completed various courses in 2015 from a Delhi institute affiliated to the Karnataka State Open University (KSUO) in Mysore. They were not aware the UGC had barred all state and private universities, including KSOU, from offering courses outside their respective states from June 2012. This means the degree from the Mysore-based open university was void.

Hundreds of institutes in Delhi still collaborate with universities of other states to offer degrees but neither the state government nor the UGC has penalised them.

“Fake degree is a criminal offence,” academician and legal educator NR Madhava Menon said. “If any educational institution violates any provision, the state can launch criminal prosecution. Quality of university education is as much a function of the state government as the Centre and UGC.”

Dozens of foreign universities too have signed memorandums of understanding with Delhi institutes to offer foreign degrees, in violation of UGC Regulations 2012, charging anything between R10 lakh and R30 lakh for a course.

The Association of Indian Universities, the nodal agency for granting recognition to degrees awarded by accredited foreign universities, doesn’t recognise these degrees issued in India.

“Often students come to us with foreign degrees issued in Delhi or other parts of the country and we refuse to grant equivalence because they are just pieces of paper with no validity,” said the association’s secretary general, Furqan Qamar.

In its reply to an RTI query, the UGC said it didn’t have information on such collaborations as none of the institutes have its consent.

But academicians argued the UGC’s failure to check irregularities doesn’t absolve the government of its responsibility to protect students.