India has become one among few countries in the world where forest cover rises constantly and it has happened despite repeated incidents of fire in forests in various parts of the country. According to a current assessment this time national forest cover has registered an increase of 5,188 square meters, which is quite an achievement in itself and the NDA government has commended itself for this.

The latest report titled “India State of  Forest Report 2019” that the ministry of environment, forest and climate change released recently says as compared to the assessment of 2017, there is an increase of 5,188 sq. km in the total forest and tree cover of the country. Out of this, the increase in the forest cover has been observed as 3,976 sq km and that in tree cover is 1,212 sq. km; Range increase in forest cover has been observed in open forest followed by very dense forest and moderately dense forest and the top three states showing increase in forest cover are Karnataka (1,025 sq. km) followed by Andhra Pradesh (990 sq km) and Kerala (823 sq km).

The government is of the view that the declines in the north east region are not yet a matter of concern because states that fall in this area had a much higher proportion of forest than most states and the declines in the forest were still small. What the ministry of environment, forest and climate change that handles the issue in collaboration with the department of north east region requires is long-term policies to address this issue.

The report is published by the Forest Survey of India, which has been mandated to assess the forest and tree resources of the country including wall-to-wall forest cover mapping in a biennial cycle. So far 16 assessments have been completed since 1987. The Forest Survey of India undertakes assessment of country’s forest resources every two years, the results of which are presented as the ‘India State of Forest Report’. The findings of the report are based on the regular nation-wide mapping of forest cover, sample plots based national forest inventory and the specific studies conducted at the national level.

The tree cover is assessed following a methodology involving remote sensing based stratification and observations on sample plots lay in the strata as part of the National Forest Inventory. Tree cover includes all patches of trees less than 1 ha. Keeping pace with the technology and refinement in methodologies are the continuous processes in FSI. In the current assessment, ortho-rectified LISS III data of IRS Resourcesat-2 with a spatial resolution of 23.5 meters for the period October to December 2017 have been used for interpretation at a scale of interpretation 1:50,000 with the Minimum Mappable Unit of 1 ha. The procedural details of forest cover mapping have been codified into a ‘Manual for Forest Cover Mapping’. For the current assessment, ground truthing has been carried out at more than 2,200 locations across the country.

A new nation-wide study has been undertaken to assess the dependence of the people living in Forest Fringe Villages for fuel wood, fodder, small timber and bamboo on the forests. The results of the study will not only help in evaluating the impacts of programmes and policies but will also help in understanding the gap between the potential productivity and actual increment observed in the forests of the country. Results of the special study on fire proneness of States based on forest fire alerts generated by FSI in the last 13 years are also presented.

The ISFR 2019 has given full credit to NDA government’s flagship fuel wood scheme Ujjwala that it says has reduced reliance of villagers and poor families on forest wood for cooking. Under this scheme the government provides free cylinders of cooking gas to poorest families in country’s hinterland. The Ujjwala scheme had played a vital role in bringing back Modi government for second consecutive term as women in remote villages who were benefited by the scheme voted for Prime Minister Narendra Modi in general elections held this May. 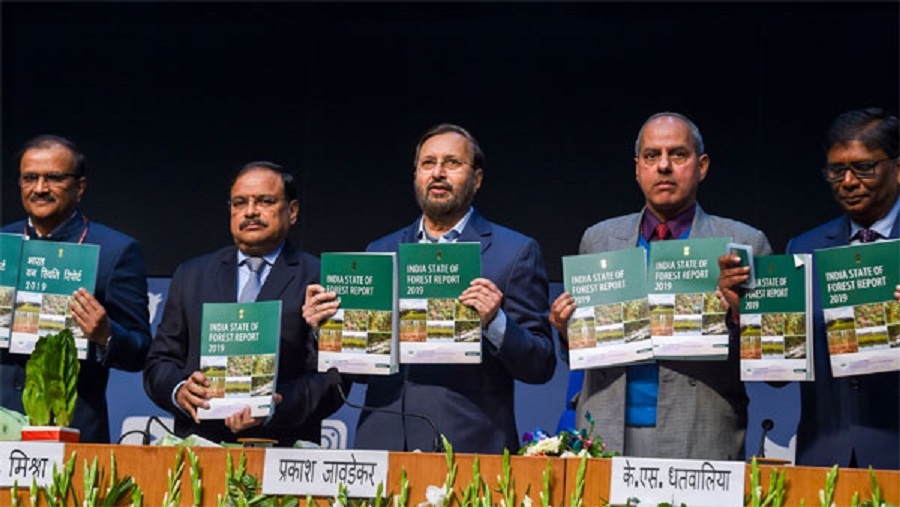 The report in its assessments conducted in 31 states and union territories arrived at a conclusion that nearly 8,5290,000 tones of fuel wood, 105,30,39,000 tonnes of fodder, 584,8204 cubic metre of small timber and 18,34,000 tones of bamboo were collected by villagers across the country. Maharashtra was among the states where maximum fuel wood was removed-95, 39,000 tones- followed by Odisha and Rajasthan. The highest removal, per person, was in Nagaland followed by Himachal Pradesh and Tripura.

Biennial ISFR report hides figures on dense forest loss in two years. While claiming an overall forests gain of 3,976 sq. Km., in the country, the report of India State Forest released on Monday has left out mention of figures of loss of forests. The fact remains that during last two years country has suffered a loss of 2,145 sq km., of dense forests that have turned into non-forests during this period. Since 2017 the offset of this loss is conversion of 1,858 sq km., of non-forests areas to dense forests.

However, a monoculture cannot substitute natural forests in biodiversity or ecological services. Some of these are fast-growing species such as bamboo in the north-eastern region and also rubber and coconut plantations in the southern states. The forest survey of India said it requires more time and resources to identify and classify plantations through ground-truthing.

Dense forests have become non-forests in the country and nearly half of this — 8,552 sq km — since 2015. Much of this destruction of quality natural forests was compensated by plantations — a total of 10,227 sq km of non-forests became dense forests in successive two-year windows since 2003 and more than half of this — 5,458 sq km — since 2015.  Dense forests are defined by canopy cover: over 70 percent is considered very dense and 40-70 percent medium dense.

Popular ecologist Madhav Gadgil said, “It is not possible to reconcile such matrix unless the FSI shares the spatial data. With so much advancement in science, the government should make its grid data public for open scrutiny and value addition”.