Assam, Bihar and Uttar Pradesh are the laggards in a ranking of states released on Friday by NITI Aayog and the United Nations

New Delhi: Himachal Pradesh, Kerala and Tamil Nadu have emerged as the front runners in the race to achieve key sustainable development goals (SDG) like removal of poverty and inequality, while Assam, Bihar and Uttar Pradesh are the laggards in a ranking of states released on Friday by federal policy think tank NITI Aayog and the UN.

According to the SDG India Index, the nation as a whole has a score of 58, showing the country has reached a little beyond the halfway mark in meeting the sustainable development goals adopted by India and 192 other nations in 2015. The index covers 13 of the 17 sustainable development goals, including healthcare, gender equality, clean energy, infrastructure, education, peace and building strong, accountable institutions.

Four goals, including climate action and sustainable use of marine resources, were left out because of lack of data at the state level. 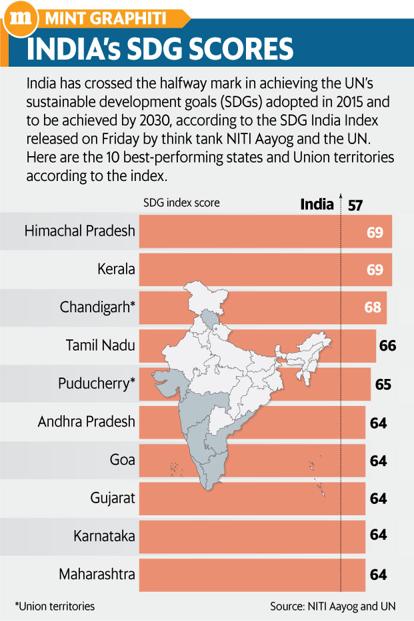 Kerala’s overall top rank (69) is attributed to its strong performance in providing good health, reducing hunger, achieving gender equality and providing quality education. The rank shows the distance each state has to cover to reach 100—the point at which it fully meets the sustainable development goal.

Kerala and Tamil Nadu also topped in facilitating good health and well-being. Gender equality, however, is an area all states and the nation as a whole need to improve upon. The toppers in gender equality, Sikkim and Union territories Andaman and Nicobar islands and Chandigarh have crossed the half way mark in reaching the goals.

Jharkhand, Odisha and Nagaland are also among the states that have a lot more ground to cover in the overall rankings.

The scores represent the current status of achievement in meeting the goals. NITI Aayog chief executive officer Amitabh Kant said that the index, which is also available for reference in the form of an online dashboard, will be updated in realtime. “This will lead to a lot of changes at the grass root level. Competition among states is key in achieving the SDG,” said Kant.

NITI Aayog vice chairman Rajiv Kumar urged the fifteenth finance commission (FFC) member Ramesh Chand, who was present on the occasion, to use the index as a tool while finalizing its recommendations on sharing of central government’s divisible pool of tax revenue with states. “Unless development becomes a mass movement,  I do not think we can achieve what we want to,” said Kumar. In an interview, Chand said that the SDG India index relies on the most recent data and will be a useful resource for the FFC. India’s progress in achieving these goals are crucial for the world as it is home to about 17% of the world population, said a statement from NITI Aayog.