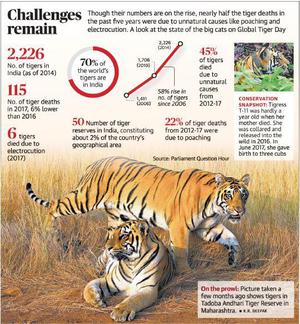 “More work needs to be done to protect big cats”.

Kolkata: She was only five months old when her mother died. On March 2016, she was taken almost 150 km from her home to the eastern part of Madhya Pradesh. Today, three-year-old tigress T-11 is thriving at Sanjay Dubri National Park in Madhya Pradesh.

Vincent Kabir, field director of the national park said that the tigress was radio-collared and released into the wild in October 2016 and in June 2017 she gave birth. In about a year, the three cubs will establish territories of their own.

“Over the past few years in Madhya Pradesh, we have released nine tigers after slowly acclimating them to the wild,” said Rajneesh Kumar Singh, deputy forest conservator, Madhya Pradesh.

As the world celebrates Global Tiger Day on July 29, there are number of such success stories of tiger conservation that India can boast of. A few months ago, the first successful inter-state translocation of a pair of tigers was carried out from tiger reserves in Madhya Pradesh to Satkosia in Odisha.

The results of the ongoing All India Tiger Assessment, 2018, are expected by the end of the year. As per the assessment of the Status of Tigers, Co-predators and Prey (2014), the number of tigers in the country is estimated at 2,226 as compared to the 2010 estimate of 1,706.

“India being home to 70% of the tiger population in the world can be a global leader in tiger conservation,” Rajesh Gopal, secretary general of Global Tiger Forum, told The Hindu. A lot more needs to be done on the conservation front, he said. “The tiger is a collective responsibility of all stakeholders and it cannot be left to the forest staff alone,” Mr. Gopal said, highlighting the need for surveillance and maintenance of tiger corridors.

The Ministry of Environment recently said that 45% of the tiger deaths between 2012 and 2017 could be attributed to unnatural reasons. Of the 45%, 22% of the deaths were due to poaching, 15% due to seizures of body parts and the remaining could be attributed to road and railway accidents. Over the past few years, instances of tigers travelling hundreds of kilometres looking for territory has come to the fore.

The Ministry has admitted that there is a 29% frontline staff vacancy against sanctioned posts in the tiger reserves of the country. Mr. Gopal stressed on the need for capacity building of the forest staff.