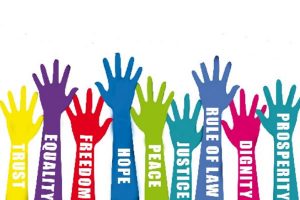 A new report from the group details the use of colonial-era laws such as sedition and criminal defamation to clamp down on government critics in the world’s biggest democracy.

It comes months after the arrest of student leader Kanhaiya Kumar on a controversial sedition charge sparked major protests and a nationwide debate over free speech.

“India’s abusive laws are the hallmark of a repressive society, not a vibrant democracy,” said Meenakshi Ganguly, HRW’s South Asia director, in a statement.

“Putting critics in prison or even forcing them to defend themselves in lengthy and expensive court proceedings undermines the government’s efforts to present India as a modern country in the Internet age committed to free speech and the rule of law.”

The report says the law on sedition, which prohibits anything that can trigger “hatred or contempt” for the government and carries a maximum punishment of life in prison, is among the most abused.

Convictions are rare, but the Indian judicial system is notoriously slow and those charged can spend months or even years in jail awaiting trial.

In 2012, police in Tamil Nadu filed sedition complaints against thousands of people who peacefully protested the construction of a nuclear power plant.

In 2014 — the most recent year for which figures are available — 47 sedition cases were registered across the country and just one person was convicted, according to the government’s National Crime Records Bureau.

The HRW report also says a law criminalising the deliberate wounding of religious feelings has had a “chilling effect” on freedom of expression in India and has led to self-censorship by authors, artists and publishers.

It cites Penguin India’s 2014 decision to withdraw a book on the history of Hinduism by American scholar Wendy Doniger rather than fight a case brought by a fringe religious group.