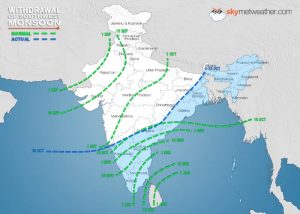 Cyclone Roanu brought the much-needed relief from heatwave across India. Even though we are in the pre-Monsoon season, a prolonged spell of widespread rainfall activity on and off the East Coast of India gave the people a taste of Monsoon. At the same time, it seems to have heightened their anxiousness regarding the onset of Monsoon.

It’s no secret that I’m quite positive about Monsoon 2016. In fact, my gut feeling says that this year Indian Monsoon could see the first event of excess rainfall since 1994, which was pegged at 112% of the LPA. At the moment, all the meteorological parameters deciding the fate of Monsoon are just too good to be true. This obliged us to revise our Monsoon forecast for 2016 and bring it up to 109% (error margin of +/-4%) of the long period average (LPA) of 887 mm for the four-month period from June to September.

Evidently, this makes me believe that it has also reduced people’s apprehensions about another agricultural drought. As we all know that Monsoon and agriculture in India walk hand in hand, this year we could expect a much better agricultural production as compared to the last few years.

In 2016, area under oilseeds including soybean, groundnut, pulses (tur, moong and urad) and rice may increase. The area under cotton may reduce marginally while total agricultural land under sugarcane may remain the same as the previous year.

Though area under cotton is expected to reduce, its production is estimated to be 29 million bales in 2016-17, against 27.8 million bales in the financial year 2015-16. This could be attributed to an approaching La Niña. As of now we can say that Andhra Pradesh, Gujarat, Haryana and Punjab have chances of witnessing a higher yield of cotton this year.

There are ample reasons for me to be hopeful for Monsoon 2016, followed by an increase in agricultural production. The “little boy” El Niño kept us all on tenterhooks for the last two years. It is finally tapering off and has almost reached the threshold neutral value. The La Niña watch is on and it will continue to develop during the summer and Monsoon seasons of Northern Hemisphere. La Niña will be declared only when the overlapping 3-month season will reach the threshold value of -0.5°C or less for 5 consecutive terms. This could be possible only by or after September 2016.

In terms of geographical risk, we believe that Tamil Nadu, Northeast India and South Interior Karnataka will be at moderate risk through June, July, August and September (JJAS). The drought-hit Central India could receive good amounts of rainfall. There may be excess rainfall in some pockets of Maharashtra and Madhya Pradesh. This will definitely be the highlight of Monsoon 2016. Some pockets of Bihar and East Uttar Pradesh could experience less rainfall. Second half of the Monsoon is expected to see better rainfall than the first half. Post-Monsoon, the spell of good rainfall activities may spill over to October.

With a positive agriculture budget in sight and forecast of above normal Monsoon rains culminating into good Kharif production in the financial year 2016-17, we can see a ray of hope farmers in India.