Researchers are aiming to bring artificial intelligence and big-data technology to small-scale, developing world farms. The goal is to take on one of the 21st century’s biggest challenges: feeding the world without wrecking the planet.

For Microsoft researcher Ranveer Chandra, it’s a return to his roots.

Chandra grew up spending four months a year on his family’s farm in India.

“There was no water. No electricity. No toilets,” he said. Bulls dragged plows through the fields, as they have for centuries.

In much of the developing world, farming remains a low-tech, low-yield enterprise, but demands on developing-world agriculture are increasing. The population in less developed countries is growing faster than average.

As the global population soars to near 10 billion by 2050, farmers will need to produce more food without cutting down more forests or polluting the land and water with excessive fertilizers and pesticides.

Modern, high-tech tools are already bringing a new level of precision to large-scale agriculture. Farm equipment can plant different densities of seeds and apply different amounts of fertilizer in different parts of a field. Water monitors can give farmers real-time data on how much moisture plants are receiving.

But these tools are far too expensive for small-scale, developing-world farmers. Chandra wants to use tech to bring costs down. 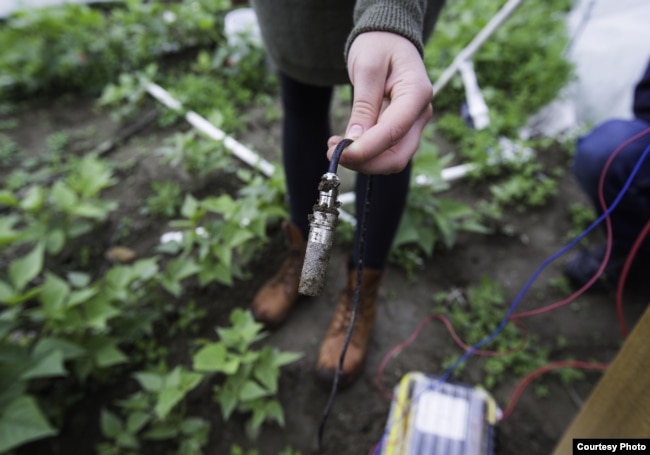 Chandra developed a system that connects cheap soil sensors to a network through unused television channels.

These “white space” frequencies can provide broadband internet connection over long distances. Some hospitals and schools in remote locations in Africa are already online via white-space connectivity, Chandra said.

Each soil sensor provides a snapshot of conditions in a patch of the farm. To connect the patches to the big picture, Chandra takes aerial photos from a drone – or, for a low-cost option, a balloon-mounted smartphone.

Then, artificial intelligence compares the aerial photos to the sensor data and fills in the gaps, drawing detailed maps of where the soil is too acidic, or needs more water, for example.

Chandra hopes to bring the cost of a basic system under $100. Different business models are under consideration, he added. For example, farmers could share a system, or a local farm service provider could rent it to them.

Microsoft is just one tech company that sees agriculture as fertile ground for the tech revolution. Google invested in a startup that aggregates farmers’ data on how different crop varieties perform from farm to farm and year to year, so farmers can make better decisions on what varieties are best for them. Amazon announced plans to buy the Whole Foods grocery chain and has invested in food retail in other countries as well.

Telecoms, startups and traditional farming firms also are vying for a stake in the high-tech farm business, according to Ohio State University precision-agriculture expert John Fulton.

“Everyone’s trying to figure out how they play in agriculture,” he said. “We’re really at an early stage of this digital agriculture revolution.”

He spent eight years in molecular biology and infectious disease research before deciding that writing about science was more fun than doing it. He graduated from the University of North Carolina at Chapel Hill with a master’s degree in journalism in 2002.