Odisha’s legendary singer, lyricist and musician Akshya Mohanty, in what context sang this song is unfathomable. But today it is most appropriate to the idyllic setting of Tikarpada Mahanadi River, Satkoshia mountain range and Sunita. Albeit in close proximity yet the chasm betwixt the mountains and the river- the theme of hope-despair, love-forlorn, happiness-sorrow and laughter-weeping reflect on Satkoshia mountain range and Tikarpada Mahanadi River and the music of the song- it is this that reveal restive Sunita’s life cascade. Sunita is only for Satkoshia Mountains and Tikarpada Mahanadi and vice versa.

As the moonbeams filter through the foliage of the Satkoshia forest Sunita seems to be recollecting her past memories in the same manner while she recollects her past memories she sees, on the river bank, the footprints of her spinsterhood. During this widowhood she sheds copious tears on seeing her very own footprints of the yesteryears. Those footprints of her spinsterhood weep inconsolably to realize how she spends each moment of her widowed life. The combination of sight and sound fusion of the morning forest breeze and the last hues of golden rays before sunset makes her float on the Mahanadi waters the twenty seven long years of pleasure and pain of Sunita. The pangs of pain of Sunita reverberated echoingly through the Satkoshia mountain range and her anguished laughter tends to mingle into the waters of the Mahanadi. Her scrape and satisfaction  at this juncture is an open satire, criticism and mockery of our present day democratic government, political leaders’ women empowerment and women safety and security slogans and all the ills that have come along since the last seven decades to make this very democracy a misnomer today. 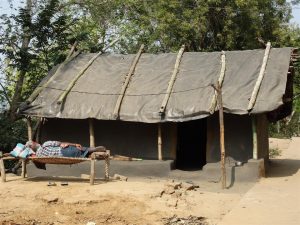 Tikarpada is a small hamlet in the Satkoshia sanctuary. This issue of Sunita is akin to the miserably wretched heartbroken of almost the entire women community being neglected ever since India’s independence. Sunita is the sole occupant of a small cottage in this hamlet in Tikarpada. Unless and until a discerningly empathetic person sees the trials and tribulations and struggle for survival of Sunita, it would be nigh impossible to believe. All of Sunita’s childhood and spinster happiness, during her matrimonial life, has been lost beyond retrievability, in the forest of Tikarpada. Her much-cherished dreams, of her married life, have been cremated on the river bed of Mahanadi. The Satkoshia and Tikarpada, albeit being mute spectators to Sunita’s travails, yet stand as great testimony to the melancholia of Sunita. But sad to say, our government and bureaucracy did never care to bat an eyeli

The much-hyped ‘Ujwala Scheme’ of Modi Govt. for 6 crore women has come a cropper and more of a dampener in Sunita’s life. In the same way, Odisha CM Naveen Patnaik’s much-touted ‘Mission Shakti Yojona’, which has purportedly empowered 70 lakhs of women didn’t do even a wee bit for Sunita. The innumerable political slogans for woman like women empowerment, women safety and security, respect for women and women power etcetera are merely empty rhetoric in our democracy. Sunita has voted twice for the Assembly and Lok Sabha election, but she has never seen her elected political representatives like the MLA and MP, despite trying to do so she has failed.

“At the age of 27 years, I am a widow since the last two years. Like other girls I too had fancied many a dream of having children and so on. But, on the contrary, my marriage and subsequent motherhood went up in smoke by virtually devastating my life, which was beyond imagination. Further, sad to say, I found myself between the devil and the deep sea. My life with in-laws was not to be nor was the home of my parents accessible for me. Behind my back there were murmurings that I had been the harbinger of ill-luck to the home of my in-laws as well as the home of my parents. Resultantly, I was ostracized. In my endeavour for upbringing my three daughters is proving to be a Herculean task and further bogging me down for our very sustenance. It is a fact that I am remaining alive solely for my children and none else. Now on my part it is really very difficult to live, but I do not want to die because of my daughters,” Sunita said this choked with emotion and lips quivering while seated on the river bank.

Ranjit had married Sunita, and from this wedlock they had three daughters, namely, Puja, Pritee and Sangita. This couple was living happily and in marital bliss until, from almost nowhere, Ranjit succumbed to tuberculosis in the year 2016. It seemed as if Divine wrath had found its target in Sunita.

Tikarpada and Satkoshia figure prominently on the tourism map of India. This tourist destination can boast of a Tiger Reserve and Crocodile Conservation Centre. In this wildlife sanctuary the Tourism and Forest Department of Odisha has established several Nature Camps. In fact Sunita’s husband Ranjit, was engaged as cook at the Tikarpada Nature Camp.

“It was too late to have Ranjit diagnosed correctly. Further, in this remote part health facilities are a distant dream as doctors are not easily available. To add to the existing woes was the fact that my husband was an alcoholic. And by the time medication commenced it was a bit too late. Ranjit’s addiction further went on to make him neglect taking his medicines on time. Neither is the Govt. banning sale of liquor nor are they providing proper healthcare services. It is this dangerous liquor, that has ruined my life,” Sunita said this tearfully while working at the Nature Camp.

Sunita says, “Having no support of my in-laws nor my parents, it is me, alone, who has to struggle at my three daughters and myself. I tend to feel that having been born a female and thereafter widowed, at an early age, seems nothing but a curse for me.”  Now Sunita keeps questioning herself and society, at large, as to whether it was my fault or a sin to have been born a girl child and later to have become a widow, was the latter a curse because of my wrongdoings in my previous life. Am I really a forerunner of ill fortune? In the forest of Satkoshia and the river bank of Tikarpada Sunita asks these questions. But she gets no answer to her queries. On the contrary, her questions simply echo and vanish in the Satkoshia forest and get murkily mingled in the waters of the rive Mahanadi which keeps flowing into the horizon.

Today she has no option but to accept the fact that she will not get any answers nor solutions from the democratic government, bureaucrats and political leaders etcetera. Thousands of women like Sunita keep on asking: as to whither the ‘Women Ujwala Scheme’? For whom ‘Mission Shakti Programme’? Where are Govt’s Women Safety, Security, Empowerment and Emancipation plans and policies?

Now Sunita who is working as cook at the Nature Camp for a paltry sum has got a BPL Ration Card and is a recipient of Widow Pension only since January 2019. Does Sunita fit in as a role model to society as per Modi’s ‘Beti Bachao, Beti Padaho’? When and will Sunita be acknowledged by the BJP Govt? Sunita’s endless struggle for her three daughters and herself is a bright and shining example of women power, but nobody knows as to when Naveen’s BJD Govt. ‘Mission Shakti’ will give justice to Sunita.

Sunita is the icon of ‘Women’s safety, security, empowerment and emancipation. But, when will all these really come into her life nowadays is a big fluorescent question staring us all in the face. Sunita does not know when all these lofty talks and political slogans will become a truth for her. By the time, if at all, these do materialize there would be umpteen women who would have sacrificed their lives in our democratic system. The life story of Sunita goes on to the dark side and flip-flop side of the government and bureaucracy. All the vote bank political gimmickry only goes on to expose the character and real appearance of the politicians who are involved in this chorus of sloganeering.

Recently, Odisha C.M. Naveen Patnaik has launched another much-publicized programme for adolescent girls, namely “Khushi” (happiness) to benefit her daughters and imagining whether really this would materialize or would it just be hollow like the other scheme and plans like what has made her to reach such a stage in her life.

Tikarpada until the 1990s was famous for all the wrong reasons, like poverty, malnutrition, poor health facilities, and white slavery. However, there has come about a wee bit of change, but not as much one would expect in the fag-end the second decade of the twenty-first century. 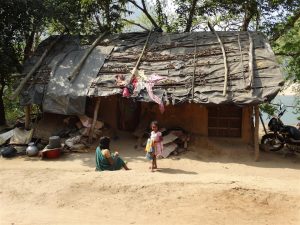 “In the Satkoshia and Tikarpada sanctuary it is purely the self-imposed jungle laws that prevail in the form of few forest officials dictating terms. These few forest officials prove to be fiercer than any wild animal. In the name of wildlife conservation these brutes do as they please. These brutal elements are least bothered about our livelihood. Without ‘Gram Sabhas’, in the name of tiger and crocodile conservation all the laws have been imposed on us. We are unable to go into the forest to collect minor forest produce and firewood, and further we have been banned from fishing in our own river Mahanadi. These few forest officials take us into custody for petty matters. There are strict restrictions for any movement after sunset, more like a curfew. On account of these imposed restrictions on movement a daughter could not visit her father who was on his deathbed, and finally her father died. Even if anyone comes after sunset he/she will remain confined in the forest rest-house until the crack of dawn. Passing even a single night at the rest-house is virtually hellish,” each villager has the same story to tell with surcharged emotion and anger.

On this the forest officials replied, “We are doing our human best within the parameters of sanctuary rules and governments regulations and laws. At the same time we are paying due attention to the sanctuary as well as the livelihood of the villagers. All is well and fine as long as one abides by the laws.”

In Tikarpada the Govt’s housing scheme for the poor people has become any eyesore as there are reports of massive misappropriation and corruption, including cheating by the contractors. The contractors lay the foundation and the plinth levels, after that the poor villagers receive the full amount for their Govt. homes, and most innocently they pay the full amount to the contractors to complete their home. But, mischievously the contractors play a disappearing act. Thus, in actuality, the government’s scheme for housing does not see the light of day. Resultantly, these poor villagers have to stay in tarpaulin makeshift cottage.

In order to populates eco-tourism in Odisha forest and tourism departments have set up many Nature Camps. Poor villagers have been working in these Nature Camps. Despite tailing from 6 a.m. to 11 p.m. these poor workers are not even paid minimum daily wages as fixed by the Govt. of Odisha. In four months each one has ended up earnings rupees 1700/- only!! Whither Govt’s labour policy, for whom has the Govt. fixed these daily wages?

On the other side the rupees 80/- per head sanctuary entry fee collection by the Govt. Officials is a big exploitation of the tourists and most of the tourists are dissatisfied with the Nature Camps’ accommodation fees per day. Tourists are demanding that the concerned officials should balance the fees collected.

It is rather shocking and sad to note that the poor villagers find themselves neither here nor there in the scheme of things vis-à-vis their lives and livelihood and the maintenance of the sanctuary. In fact their wait, of the villagers, for government assistance, is very similar to Samuel Beckett’s ‘Waiting for Godot’.