For the success of Satkoshia Gharial project the CM of Odisha Navin Pattanaik, twitted with happiness. Forest Department was overjoyed and circulated the photographs and video clips of Gharial hatching, along with mother and 28 baby Gharials.  The Indian and foreign medias reported it with a big success and glory of Satakosia Gharial project. But such joys and happiness did not survive for long. A Few weeks later now all baby Gharials have missing from Satkoshia gorge. Nowhere about and information is available with the forest department about the mother and the babies Gaharials!

Local people alleged, “Due to the use of scientific machineries like power boat and drone camera this problem was created and it is happened only because of some few forest officials’ irresponsible work. The department authorities used power boat and took photographs through drone camera. Now the local villagers warn that it will be difficult to trace out the hatchlings with the advent of flood in the river”. Whereas forest officials are hopeful that all baby Gharials along with mother are in safe place and we will find them out soon. As per the opinion of the experts, it was really a blunder to use drones and motor power boats instead of these they could use the native boats and binocular.

Regional chief conservator of forest and Satkosia field director Pradeep Rajkarat said, “After we noticed the hatchlings emerged on May 22, immediately, we got one temporary camp established along with a PTZ camera and solar system for charging. A CCTV camera was fixed there and we were closely monitoring it without going near it. From the waterfronts also we had a team for observing with binoculars, the mother Gharial was guarding the hatchlings and they were in the river banks. However, the Gharials have now gone inside the water. We have to safeguard from other human interference, like fishing and other activities that should not unnecessarily kill.” 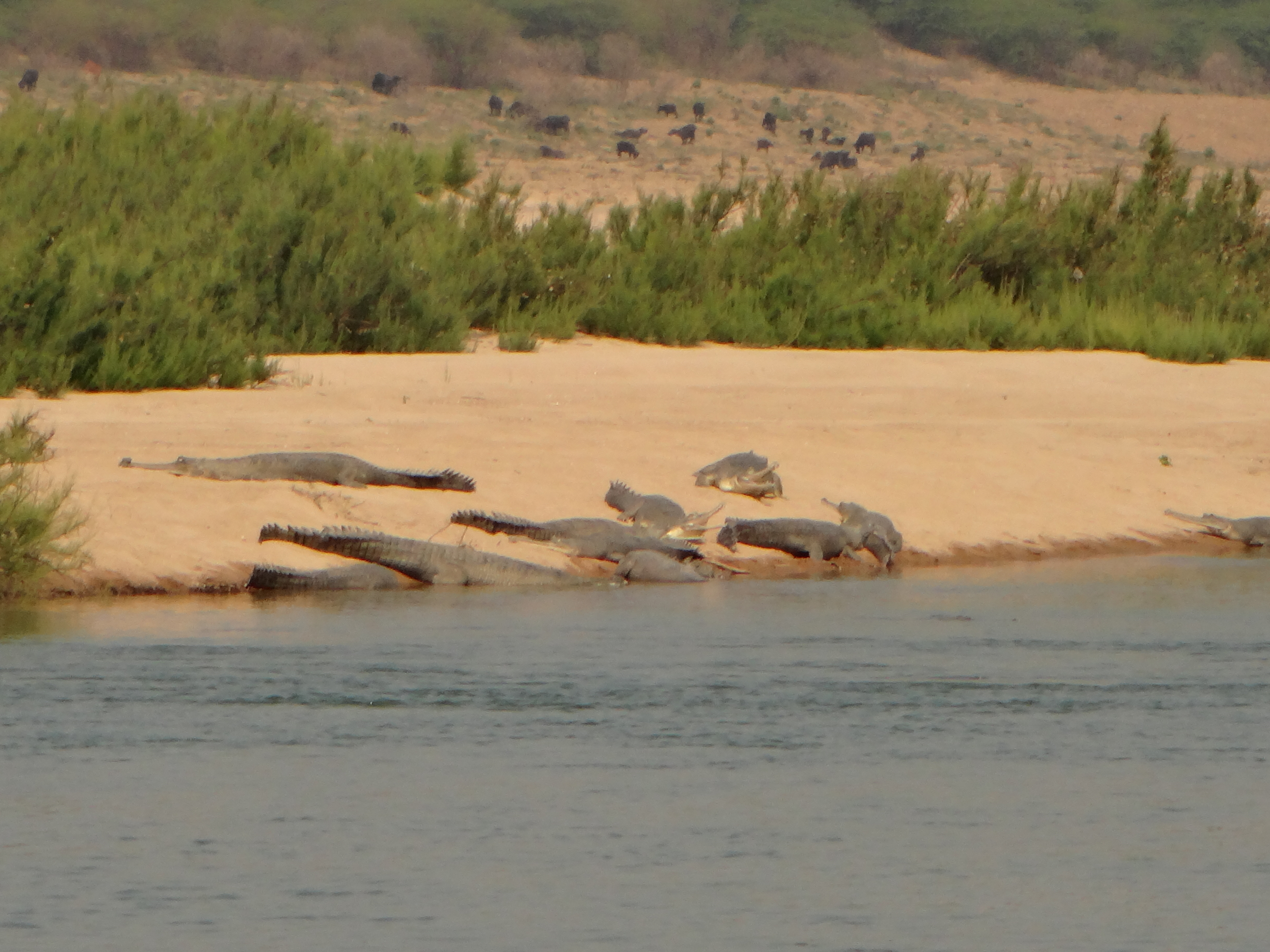 This tragedy we can explain like this, after a long waiting of 46 years, the glory reached, but after 46 days the glory faded away. This life; Ephemeral! It is very much appropriate for 28 missing baby Gharialof Satkoshia?

On the other hand, it’s a day of celebration for the Indian Gharial! The international union for conservation of Nature (IUCN) had put the Indian Gharial in the red list in 1971; after a gap of 46 years of Gharial conservation in India in some key areas, and realisation of hope with Satkoshia, it was hoped for a move to bring Gharial to the green list following the prescribed road map. This change is a result of increase in the Gharial population which is a remarkable feat in the conservation of wildlife especially Gharial achieved by India. Scope to upgrade any species or protected area from red-list to green-list is linked to the concept launched in 2014. Both the Odisha and Central Government started making serious effort to bring Gharialin the green scheduled list.

For ages, Odisha has been the only state to have all three species of Indian crocodilian, the Gharials, mugger and estuarine crocodiles. That is the reason; the national crocodile conservation project from 1975 was launched in Odisha. Odisha declared the first three wildlife sanctuaries for crocodilian conservation. The Gharial project is at Tikarpada with Satkoshia Gorge sanctuary. The mugger project is at Ramatirtha in the outskirts of Similipal. The estuarine crocodile is at Dangamal in Bhitarkanika Sanctuary. A captive breeding program for all three was started at Nandankanan. Both ex-situ and in-situ methods were adopted as approaches in Gharial conservation.

By 1990, about 600 Gharials were released in Mahanadi, but there were bamboo rafting, large marketing boats moving between Narasinghpur and Boudh, fishing camps and fishing all along the river banks, accidental release of mugger crocodiles, partial or complete withdrawal of monitoring by small boats on daily basis. Breeding within Satkoshia had shifted to about 40 km upstream around Boudh and adjoining tributaries used as monsoon retreats. Since hatchlings were not seen in sanctuary it was taken for granted that viable population of Gharial didn’t exist in Mahanadi.

Adult Gharials visited Satkoshia at times, as the people say, but didn’t use it for breeding. Hatchlings were seen in 1984. Adults were photographed within the sanctuary, and the last was in 2017 by DFO of Mahanadi Wildlife Division for the book Satkoshia seen and unseen, published by Odisha Wildlife Headquarters. Effort to release more Gharial started after 2019, with an ambitious research project with headquarters from Nandankanan Biological Park.

During the last 2-3 years, with strict fishing regulation, tranquillity is brought to Satkoshia because of Covid restrictions, and a mother Gharial has also returned and nested in 2021. Encouraging the efforts, 28 hatchlings and the mother Gharial were sighted and photographed. But this clutch of eggs from mother is not her maiden clutch. Gharial maiden clutches range from 6 and average around 10, with around 75% successful hatching. Return of breeding Gharial to Satkoshia completes full circle in Gharial conservation that started in 1975 at Tikarpada with UNDP / FAO, Government of India, and Government of Odisha collaboration.

Now Gharial populations have revived in its former range in India, Nepal and Bangladesh. In India the National Chambal Sanctuary and the Gandak River are the best places to see them. Now Satkoshia has reappeared in this list after 46 years. The population is monitored with low flying drones.

Congratulations for all the people who have worked towards Gharial conservation in its range in the Indian subcontinent. All species cannot be conserved in all places in 21st century. But it appears possible to reverse the Gharial from IUCN Red Data Book list for the new 2014-concept of IUCN Green List, that is strongly pursued by CPSG.

From red scheduled list now Gharial is aiming for green scheduled list but consistent maintenance and monitoring will be required. They need to be carefully protected. After many failed attempts Gharials have hatched in Odisha’s Satkoshia gorge. The Indian Gharialis famous worldwide by its scientific zoological name ‘Gavialis gangeticus’. In 1975 Gharial Research and Conservation Unit (GRACU) was set up in Tikarpada of Odisha. It is situated near Satkoshia gorge sanctuary of river Mahanadi. The task of conservation of Gharial has been on for last 46 years in the Chambal, Girwa and Gandak rivers. Even Nepal, Bangladesh and Bhutan have taken initiatives in the same direction.

In the initial days of the Satkoshia Gharial project the research officials had involved Munda tribes for egg collection and husbandry assistance, and local fishermen for supplying fish to crocodile farms. Local community members were given khaki uniforms and appointed as Gharial guards. Gharials were breeding in Mahanadi River and had remained undetected after they moved out of Satkoshia during the late 1970s. They have returned to Satkoshia range after bamboo rafting was stopped, fishing was strictly regulated, and the Covid-induced lockdown brought order and created a serene habitat for Gharials.”

The success of this conservation programme can be gauged by the facts that in May 2020-21, 28 Gharial were born in Satkoshia gorge in Mahanadi River. The captive rearing project started in 1975 and in 1976, Satkoshia Gorge Sanctuary was notified on 796 kms of forest land along the Mahanadi River. June 18, 1975 was the birth day of the first Gharial in captivity at Tikarpada, and then we went on rearing them. In 1976, we got eggs from Nepal, but due to delay in transportation there was more mortality at the embryonic stages. In 1977, we first released the young Gharial in Mahanadi. Once the young ones are 3-4 feet, they don’t have enemies other than other crocodiles and humans. By 1990, some 600+ Gharial juveniles were released. We got our first clutch of eggs from Gandak in Bihar and hatched successfully. The river Gandak is Narayani in Nepal. Gharialis considered among the most critically endangered and genetically weak species, compared to saltwater crocodiles and muggers.

B K Swain the local journalist and keen conservationist says, “Gharialis the oldest crocodile and is a sensitive species compared to muggers. Gharials need perennial deep water and different basking sites are required for hatchlings, juveniles, and for adults. Additionally, side streams and monsoon retreats should also be available for Gharials to survive. The project faced a brief setback in 1980 when a district forest officer accidentally released muggers inside the river near the Gharial hatchlings site, causing competition as Gharials are the most endangered species. To make the conservation project a success, the government decided to involve community members. The journey for conservation of Indian Gharial (Gavialis gangeticus) started in 1975 at Gharial Research and Conservation Unit (GRACU), Tikarpada, and adjoining Satkoshia Gorge Sanctuary along the Mahanadi River in Odisha.