Deliberative policy-making is the cornerstone of democratic governance. For Equality & Justice. A PEOPLES‘ AGENDA … A document has been released by ACTIONAID India aims to embody this maxim by bringing the felt need of peoples and vulnerable communities, front and centre to further inform broad-based and inclusive processes.

Deliberative policy-making is the cornerstone of democratic governance. The document For Equality & Justice: A Peoples’ Agenda aims to embody this maxim by bringing the need of peoples and vulnerable communities front and centre to further inform and make broad-based and inclusive the processes of formulating development policy. The document has been compiled through extensive discussions in multiple states with various communities, community-based organisations, civil society organisations and people’s movements.

It represents the concerns and needs of people from marginalized communities, including Dalits, tribal peoples, and especially nomadic tribes and denotified tribes (DNT) and minorities, and amongst them focusing on women. These sections form the multitudes of farmers and agricultural labourers, fishworkers and rural and urban informal workers in the country. The document builds upon the idea that the current rights framework, which is predicated on individual human rights, must be expanded towards the establishment of collective rights and the protection of collective goods or commons. Therefore, it carries recommendations for ensuring the protection and rehabilitation of commons such as water. Thus it emphasises policies to enable access and control over the land, forest and water resources of tribal peoples, who have been historically and unjustly denied access yet play an important role in conserving and maintaining them in all their traditional and customary wisdom. The document encompasses a range of issues such as the rights and entitlements of workers, the need for land reforms, provision of housing as a right, ensuring urban governance, the right to education, and effective and timely disaster response and mitigation.

What emerged principally in the conversations we had with women’s organisations across the states, were the need to recognize the role of women in the worlds of work, to uphold the principle of equal pay for equal work and to accord women engaged in agriculture the status of farmers. The demand for 50% reservation for women from the Panchayat to Parliament came up strongly in all the meetings.  Members of the Pramila Bahini, which works on land rights and against human trafficking in West Bengal, activists working at the Gauravi One Stop Crisis Centre, Bhopal, Madhya Pradesh and leaders from Swaraj Network of Karnataka, all spoke about the need to actively implement the provisions to prevent violence against women and accord justice to survivors.  Activists with the Mahila Adhikar Manch, an organization active in Nalanda District, Bihar, spoke about the need to issue Kisan Credit Cards to women farmers, to promote co-operatives of women farmers and the extension of all rights and entitlements to women farmers. In West Bengal the Paschim Banga Griha Paricharika Samiti, an organization of domestic workers spoke about the need to recognize the work of women across various spheres as labour, the need to ensure equal pay and secure working conditions. The meetings with the Ekal Nari Shakti Manch brought focus on the need to extend the status of single women and its associated rights and entitlements to not just widows, but also to divorcees, separated wives, women with missing husbands and unmarried women. They demanded a policy for single women that would ensure their social security.

Conversations on the issues related to rural India ranged from land rights, to forced labour and the need to promote climate resilient sustainable agriculture. The Kisan Majdoor Chetna Sangathan in Madhya Pradesh shed light on the issues of farmers and land rights, and called for the provision of five acres of land for landless farmers. The Dalit Adhikar Manch in Bihar and the Musahar Manch in Uttar Pradesh spoke about land rights of backward sections, especially Dalits. They spoke about the need to provide both homestead land and agricultural land for the landless. The specific issues of panchami and mahar lands were raised. These are lands that were issued to Dalit and other backward communities but are in the possession of others. There is a need to ensure that the title deeds were issued to the legitimate claimants of the land. Similarly, all land disputes need to be reviewed and in cases where despite the existence of land titles in the name of Dalit farmers, the land is in the possession of others, the cases need to be settled in fast track courts in favour of the legitimate claimant. Dalit Dasta Virodhi Abhiyan, an organization working with Dalits in Punjab spoke about the need to stringently implement all the legal provisions to end forced labour, bonded labour and human trafficking in India.  The Disaster Risk Reduction Committee in Maharashtra emphasised the participation of the village and rural communities in planning and implementation of schemes to promote sustainable agriculture in drought-prone areas in the country, especially like the region of Marathwada’s Jhalna and Aurangabad Districts. 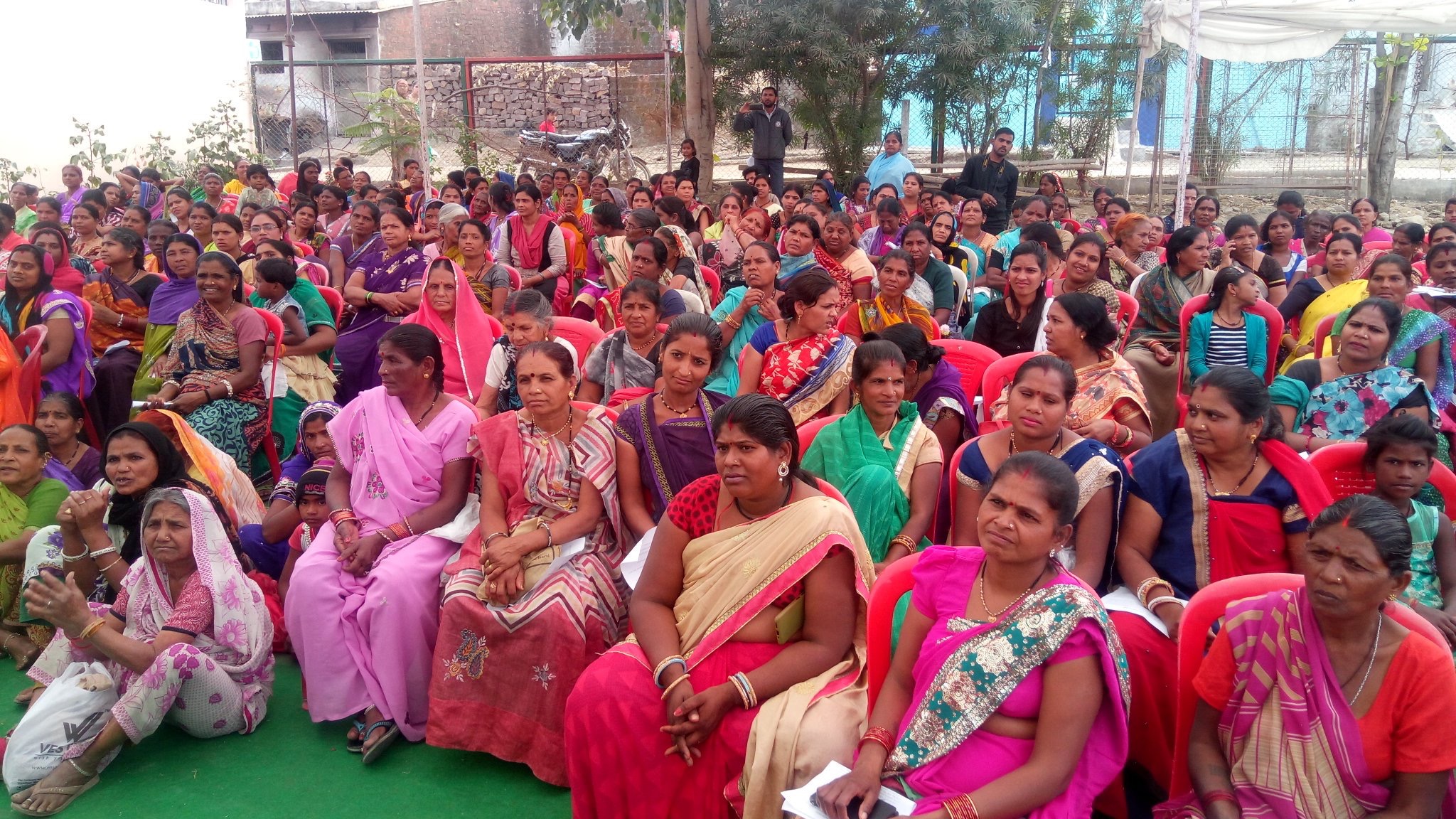 Regarding unorganized labour the primary need articulated was the strict implementation of minimum wages across the country and ensuring basic needs of regular employment, food security, health and housing. Dehadi Majdoor Sanghatan, Uttar Pradesh spoke about the need to fix minimum wages at the rate of Rs 18,000/- per month, and also raised the need of regularizing and systematizing labour posts so that informal workers who come to sell their labour at these spaces have proper places to wait, with drinking water and access to free toilets. The Jaipur based Rajasthan Kachchi Basti Mahasangh spoke about housing needs of migrant workers especially those who live in informal settlements. They raised the issue of homes for the homeless, basic civic services for all informal settlements and adequate rehabilitation for those whose houses and settlements are demolished.

In March 2019 more than 300 leaders from more than 40 tribal organisations from across 10 states met in Raipur, Chhattisgarh in a Rashtriya Adivasi Adhiveshan and called for the effective implementation of the Panchayats (Extension to Scheduled Areas) (PESA) Act and the Scheduled Tribes and Other Traditional Forest Dwellers (Recognition of Forest Rights) Act (FRA). Through PESA they sought to ensure the effective and democratic evolution of traditional forms of self-governance, and through the FRA they wanted tribal communities to take on the responsibility of protecting forests, forest lands, water bodies and minerals as commons to be used for the good of all humankind. Tribal organisations including the Adivasi Janjati Adhikar Manch, Jungle Bachao Andolan, National Adivasi Alliance and Khedut Majdoor Chetna Sangh, have called for building a new positive relationship with tribal communities to ensure the spread of education and improving living conditions to ensure that the future is not a mirror of a past that has seen so much injustice.

The need for ensuring access to education, employment and livelihood for nomadic tribes and de-notified tribes (NTDNT) was expressed as was the need to pass a law in Parliament to set up a permanent National Commission for Nomadic Tribes and De-notified Tribes. Identity cards, land rights and housing rights for NTDNT communities was raised. Civic services to existing settlements of nomadic tribes, especially road access, electricity, water supply and proximate schools was demanded. Steps needed to be taken to remove the continuing stigma against denotified tribes and to enhance security, including the repeal of the Habitual Offenders Act, 1952, which in many ways has replaced the British colonial notification of the so called ‘criminal tribes’.

Education dominated the child rights agenda. The demand was for the strict implementation of the Right to Education Act to ensure that all children get equal access to quality education. Activists and volunteers associated with Nai Pahal, the joint programme being implemented in collaboration with the Government of Uttar Pradesh and UNICEF spoke about the need to take steps to ensure enrolment of all out-of-school children in schools, ensuring clean toilets and safe drinking water in schools. Activists involved in the running of Child Friendly Spaces set up with UNICEF in Jammu & Kashmir spoke about the need to serve children whose education has been disrupted and the need to create alternative avenues of the educational development and mental well-being by ensuring they have access to opportunities to grow, play and learn.

Our activists who have long experience of disaster risk-reduction, response and rehabilitation spoke about the need to institute standard operating procedures that would call for focus on children, youth, women, the aged and people with disability during rescue and relief operations and in resilience building and risk reduction programmes. These sections of society are most vulnerable in emergencies and help ground resilience building activities.

We are witnessing a crisis of ecology, which is marked by climate change, worsening inequalities, multiple and protracted conflicts and mass displacements. These issues cannot be addressed unless we challenge the hegemonic forces of social, cultural, political, economic, and environmental exploitation. The way forward entails bringing forth the knowledge and protagonism of dispossessed communities and supporting their struggles for social and ecological justice, while strengthening legal frameworks and protective mechanisms. We have helped compile this document and the demands herein to provide people across all spectrums of belief and opinion a template for mobilising and undertaking progressive actions which are based on the leadership of excluded and vulnerable communities, feminist principles and inter-community synergies. We also hope that this document will propel further discussions and deliberations, thus deepening democratic spaces and discursive policy-making in the country.

Mr Sandeep Chachra is currently the Executive Director of ActionAid India. Social anthropologist by training, and a development activist who has lived and worked with indigenous people and dalit communities in India. National Advisor on Homelessness and Urban Poverty to the Supreme Court Commissioners of India on Right to Food case. A development activist, Sandeep has written several papers and has developed resource-packs for activists. He is also the Managing Editor of Agrarian South: Journal of Political Economy (SAGE Publications).