The government’s success rate in rural housing schemes is close to 70%.

On November 2016, Prime Minister Narendra Modi launched the Pradhan Mantri Awas Yojana (PMAY) – Gramin with the aim to build 10.2 million houses in rural areas by March 2019. The target was split equally between 2017-18 and 2018-19. This was meant to be the crowning glory of the Bharatiya Janata Party-led National Democratic Alliance (NDA) government’s efforts to provide housing for India’s rural poor.

However, data from the ministry of rural development suggest that the scheme’s performance has been less than stellar. In 2017-18 it had a success rate of 57.5%. As opposed to the target of 5.1 million houses, the government was able to complete 2.93 million houses under PMAY (G). The same year it also completed another half a million houses which had been pending under the erstwhile Indira Aawas Yojana (IAY). If both are clubbed together (3.4 million), then the government’s success rate in rural housing schemes rises from 57.5% to 68.6%.

Right now the challenge before the government is to double the speed of construction in order to complete the remaining 6.6 million houses before March 2019. To achieve this target, the Centre has to nudge states such as Assam and Bihar, which have been lagging behind in implementing the scheme.

The government seems to be confident of achieving the target before the deadline.“The target of completing one crore PMAY (G) houses by March, 2019, is easily achievable as it is expected that 60 lakh (six million) houses where the first instalment has already been released and work is in progress, will get completed by June 30, 2018. The effort of the department is to try and complete one crore houses by December 31, 2018, even though the target is March 3, 2019,” the ministry of rural development said.

In 2015 the prime minister had also launched a scheme called “Housing for All by 2022” for those living in urban areas. Also known as the Pradhan Mantri Aawas Yojana – Urban, this scheme is projected to build 12 million houses by 2022.

However, the progress of PMAY (U) has been slow. According to available data, only about 10% of the projected number of houses have been completed. Of the 4.65 million houses which were to be built, 350,000 were completed till March 22, 2018. The government claims that it has built an additional 170,000 houses that were pending under the erstwhile Jawaharlal Nehru National Urban Renewal Mission (JNNURM) scheme.

Noting the PMAY’s below par performance, a parliamentary oversight committee stated in a report: “With regard to financial performance, it is observed that out of a total project cost of Rs 2.04 lakh crore (Rs 2.04 trillion) and total central share of Rs 57,699 crore (Rs 576.99 billion), as low as Rs 26,162 crore (Rs 261.2 billion) have been sanctioned for release. The Committee is, hence, constrained to note that all is not well with the implementation of the scheme and the progress of PMAY has been disappointing.”

However, officials in the government said the committee’s conclusions are unfair as it takes around 18 to 24 months to complete a house. The scheme picked up momentum post October 2016 following tendering activities, they pointed out, adding that the Centre has already set up a National Urban Housing Fund (NUHF) to raise Rs 600 billion over four years to finance the scheme.

“The scheme was in preparatory stage in 2015-16 and the actual work started in 2017-18. Now that the states and cities are all geared up, implementation should gain momentum now,” he added.

The parliamentary committee has also expressed its displeasure over two other urban schemes – Smart Cities Mission and Atal Mission for Rejuvenation and Urban Transformation (AMRUT). It said the government failed to spend and execute projects even though three years have passed since the schemes were launched on June 25, 2015. 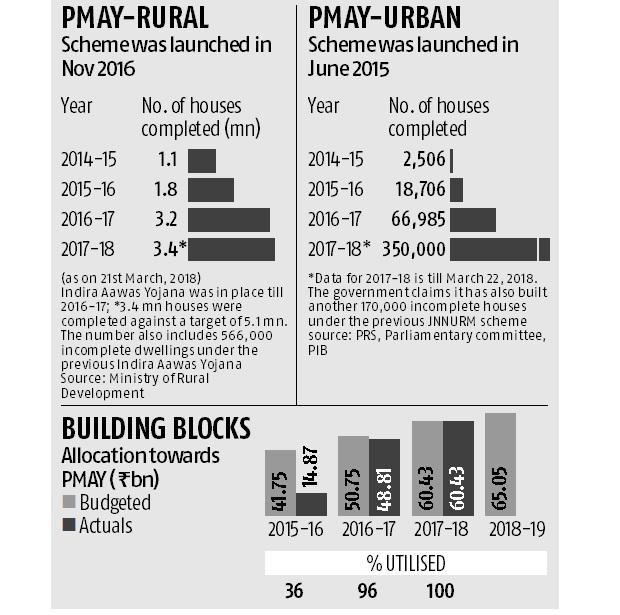 The Smart City Mission has had a fund utilisation of less than 2%. Of the Rs 99.43 billion sanctioned for this scheme, only Rs 1.82 billion has been spent so far. Under this programme, the government aims to either redevelop at least 50 acres or retrofit 500 acres or build a new project over 250 acres in a city. Rs 480 billion has been committed for 100 smart cities over a period of five years.

Similarly, fund utilisation under AMRUT – through which the government aims to provide water, sewerage and drainage facilities to a select 500 cities – was 28.74%. Among the two schemes, AMRUT has been allocated Rs 124.47 billion out of which only Rs 24.80 billion has been spent so far.

However, the authorities feel that it is premature to say that these schemes have not made much headway. Jagan Shah, director of National Institute of Urban Affairs, and one who has been closely associated with the Smart Cities Mission, said, “A large number of projects are in the pipeline. The final judgment should be passed on the mission only when it completes five years.”

No doubt, the final picture will only emerge later. For now, though, while the government has certainly made progress in rural and urban housing and development, in many cases execution has fallen short of the targets that were set.

By arrangement with Business Standard